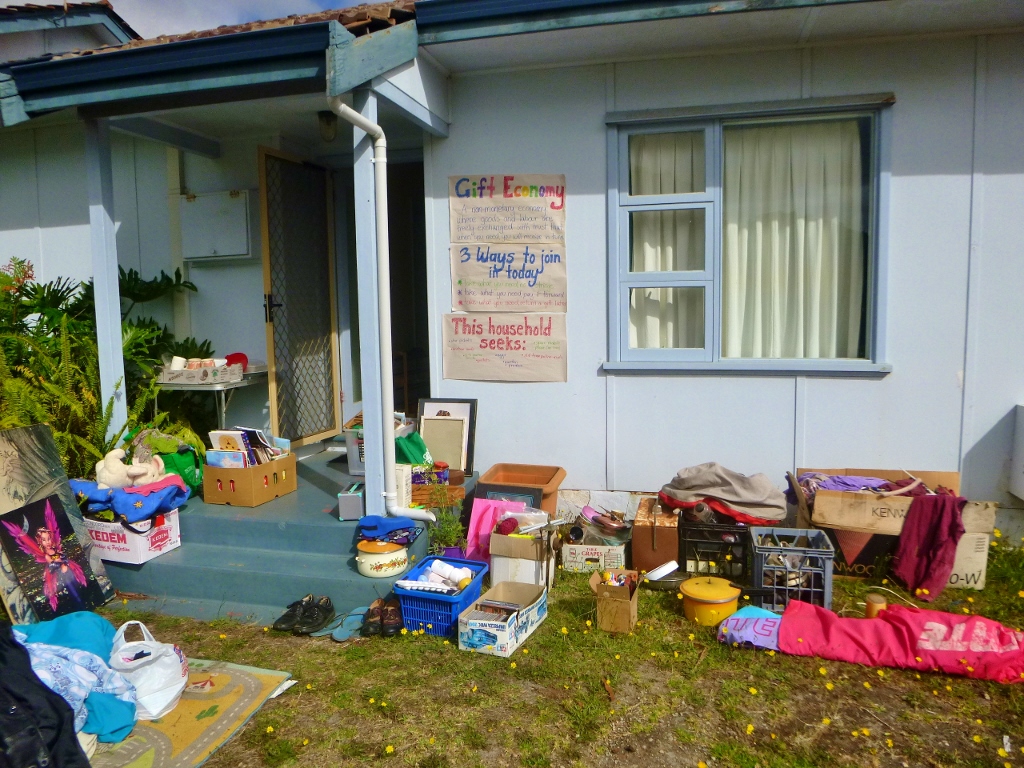 February 10, 2018
Finance and Investing Principles of Frugality and Ethics

Last month, instead of holding a normal garage sale I gave my things away for free. I have been involved in various gifting or alternative economy schemes, including #foodisfree stands, Buy Nothing, LETSLETS, Freecycle, Pay It Forward, Little Free Library, Bookcrossing and Little Free Pantry. I’ve set up stalls to give away food at my home and at my workplace. I’ve swapped books at designated swap shelves. I host travellers at my home for free through the Couchsurfing website.

The free garage sale was different, because I was doing it without a recognised network or scheme. I just wanted to stimulate more gifting in my local community. The definition of gift is something that is freely given; there might be reciprocity, and there might not. There will certainly be goodwill created, but you might not get something back (otherwise it is swapping or bartering).

In my experience, often when I try to give things to strangers it throws people off guard. They don’t know what the expectation is; how to square things without paying money for it straight away. It can make people quite anxious – suddenly the social norm is upset.

So for my gift economy garage sale, I wrote a clear definition of my expectations and stuck it to my wall. I wrote a definition for ‘gift economy’, and three ways that I invited people to be involved. I also wrote a list of items that my household was seeking, so that if people wanted to gift me something in return I’d get something useful.

During the day, I did get someone who was thrown off kilter by the absence of money. I mostly stood out the front yard and talked to people, but wandered into my house at times – it’s not like anyone could steal the things out the front! One lady knocked on the door, needing some clarity about how this strange system worked; I explained, yes, you can take things for no payment. If you choose to return something, here’s the list of what we’re looking for.

Over the next few days, I received: a couple of pallets, a bundle of seeds, a huge pack of sliced ham and several of sliced cheese, ice creams, a child’s wetsuit, promises of homegrown vegetables. Deciding to be content with no return on my items meant I didn’t need to. By lowering my expectations, their obligations, to zero meant I was also to experience the joy of receiving gifts.

I noticed that I had more conversations, and more urge to know the person’s name, than if I’d been selling things for money. Removing the money instantly made it more about relationships. People introduced themselves; I met neighbours, Facebook friends I’d never seen in person and complete strangers. People seemed to want to connect with me.

I had a conversation with a kindergarten teacher who had picked up some books and an old-fashioned dial analogue phone for her classroom. It turns out she works at the same kindergarten I attended, thirty years ago. She invited me to come back and have a look.

Something else I hadn’t expected was that other people wanted to bring stuff to give away. After several people asked if they could donate items, I decided that this was ok as long as they returned at the close of the event to pick up what was left. The point of this ‘sale’/giveaway was to end up with less stuff! Two people took me up on this offer. One couple efficiently unloaded a picnic rug load full of kitchen gear and bits and bobs, and whisked it away at the end of the day. Another lady left a few girl’s clothes and books.

One of the picnic rug items was a toaster that looked a bit fancy, so I took it inside, tested it, and swapped it for my basic white toaster. Another person picked up my plain toaster before the end of the day, and I kept the upgraded version. I also had fun playing records loudly inside, so I could test them during the day. I kept a few, as well as some cassette tapes which I can play in my outdated car stereo.

It was altogether a different experience. I didn’t have as many people as I had expected. I was also surprised that quite a few people browsed but didn’t take anything. I was hoping to get rid of stuff! I only advertised it on social media. Next time I’ll put a garage sale ad in the local paper, and perhaps a poster in my local supermarket. Even with fewer people, I did reduce the amount of stuff I had to cart back inside. I also had interesting conversations. It met my need for contribution, and for trust.

Trust is the basis of the gift economy. Like Couchsurfing, where I invite international travellers to stay in my home for free, it’s about choosing to trust in the world. It creates safety and connection by taking a leap of faith. And I’m not talking about blind trust, or ignoring danger signals. On the contrary, you learn how to listen to every little flicker of intuition.

I could have sold my things for money, haggled with people, put the money somewhere, and then bought the things I needed. Instead, trusting in the gift, I had the joy of giving. The satisfaction of contributing. The lightness of offloading things. The buzz of connection. And the hope that it will ripple out into the world, that someone will go home feeling more generous because I gave to them, and will pass it on down the line. That’s how you change the world.

The Wonder of WWOOFers

May 1, 2019
rachel
Entertainment and Celebration

Moving Into My Rainbow House