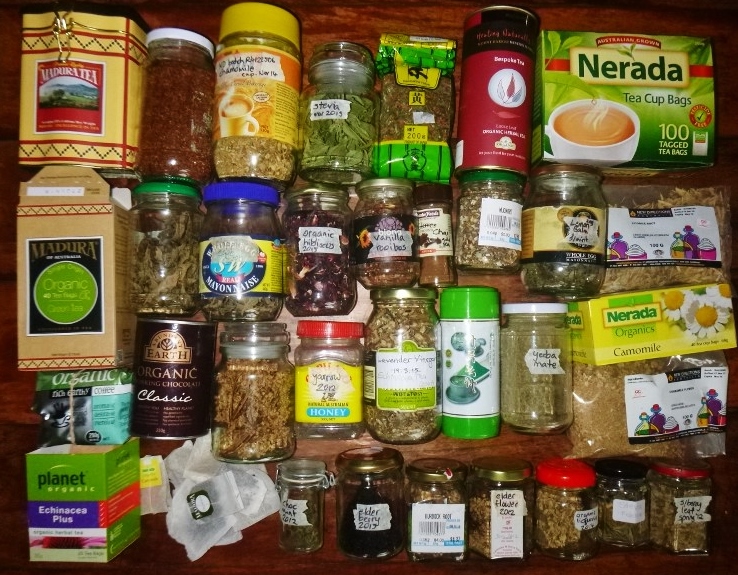 Our Second Month Without Buying Food

May 28, 2015
Finance and Investing Food and Cooking

We’re on a no-spend food challenge. It’s been two months today. Do you think my pantry is looking bare yet? No, I’m still waiting!

It hasn’t been completely spend-free. I want to do this out of curiosity, not a sense of deprivation.

In the first few weeks, I bought a couple of rolls from the supermarket as a quick meal for my child. (Plastic-free healthy-ish fast food for two dollars: a bun in a paper bag and a can of tuna. Add a few loose-leaf lettuce pieces or a tomato, in a paper mushroom bag, if your child will eat them!) I figured this wasn’t groceries, it was takeaway.

I ran out of plain salt in the second month while I was pickling olives and had to buy a packet. In plastic. Sigh. I tried at the local food co-op and all the health food shops, but the co-op was out of white salt and the other outlets only had gourmet pink salt. Not worth using that for olive pickling, as I discard the brine so many times. We also bought a cabbage because it was 70 cents and we wanted something milder than the black kale from the garden.

We ate the sweet cabbage raw that night with steamed homegrown potatoes – yum!

One week I bought a few sunflower seeds from the healthfood shop as a snack.

We had fish and chips as a treat (well, just squid rings and chips cos that was cheaper), and a sausage sizzle a different week.

My child’s school has school canteen once a week or less, so I paid a few dollars for those for the social factor.

This week I bought a litre of milk because I had to feed my kefir. It will die if I leave it much longer without fresh milk. Kefir has heaps more probiotics than yogurt, and I want to keep it alive.

A litre of milk and a packet of blu-tac, and the shop assistant tried to put it in a plastic bag for me. No! Blu-tac into the handbag, and pretty sure I can manage to carry a single bottle to the car without a bag.

Apart from those items, we haven’t bought supermarket food for almost two months. I’ve swapped and foraged, and spent $15 on fruit and vegies at the local markets. So we haven’t completely avoided buying food, but pretty close.

And we still have heaps of food!

This is our fruit bowl. Tiny mandarins, green tomatoes and lemons from the neighbours, feijoas and apples from the markets, avocados, quince and tamarillos from the swapping station. Plus a few local kiwi fruit, and loads of lemons (not pictured).

I have about thirty kilos of different flours. A few kilos of baker’s flour (I’ve been using this in our weekly bread baking), six or seven kilos of plain flour, and about ten kilos of self raising. In the blue bin is a kilo or so of wholegrain rye flour (for the sourdough starter) and in the red bin is an almost-full sack of wholegrain spelt flour.

That’s not including the organic whole wheat, which I could grind into flour or cook as is.

I have this much jam and pickles left. We don’t go through jam quickly, because I set limits on our sugar consumption. I could barter some of it for something else. Or cook with it, instead of using sugar or honey. There’s some nice seville marmalade that I made last year from bartered oranges, plum jam and a savoury plum sauce from two years ago, several strawberry and cherry jams. There’s plenty of homemade tomato sauce and relish (bartered), pickled zucchini and carrot relish from the swapping station, and some chutney.

I like buying teas, but I don’t really have a tea drinking routine. Which is why I have this many teas in my cupboard. I’ve done the rooibos thing (got three jars of it still) and yerba mate. I picked enough stevia from my potted plant to last me until it sprouts again in spring. I add stevia or licorice to other teas for sweetening. I use echinacea, mint, yarrow, elder and chamomile for medicinal teas. I like good green tea. I bought hibiscus tea to make homemade gummies and mugwort tea for dreaming. Must drink more tea.

If I wanted to, I could last for months on damper, jam and tea. Just like a real Aussie pioneer. Only it won’t be strong black billy tea, it will be genmaicha or licorice.

So far I’ve saved at least $400 on groceries. I usually spend about $60 or more on food per week, which is well under average, because I make or barter a lot of food anyway. So when I save money on food, something drastic is underfoot!

I want to go shopping, out of habit or comfort. But there’s too much on the shelves still. We haven’t even run out of cheese yet (still got some of that good sheep cheese). Still got chocolate. I even have goji berries, chia seeds, lucuma powder, plum rum and raisin jam, canned tuna, cherries in vodka, and avocados.

You have to understand, I’m the type of girl who used to save her Easter eggs until the next Easter, nibbling off a little every so often. I like to prolong my pleasures. Of course that doesn’t work so well when you have three younger siblings who wolf their own chocolate down and look around for more. I’m an old hand at eking my chocolate out, as well as finding good hiding places for it. I’m going against my own nature, trying to finish everything in the house.

Eat it all up? But then the shelf will be empty! Yes, Rachel, that’s the goal. We have to move house at the end of the year, and the less boxes of food the better.

The longer we do this, the more ways I find to avoid buying food. Will I ever do a proper shop at the supermarket again? Next month we’ll surely run out of something important enough to go shopping for… and then I’ll try the local grocer, health food shop and co-op before I set food in the supermarket.

Next week I’ll share how we found food to eat for two months and counting, without going shopping.

How We Survived Two Months Without Buying Groceries