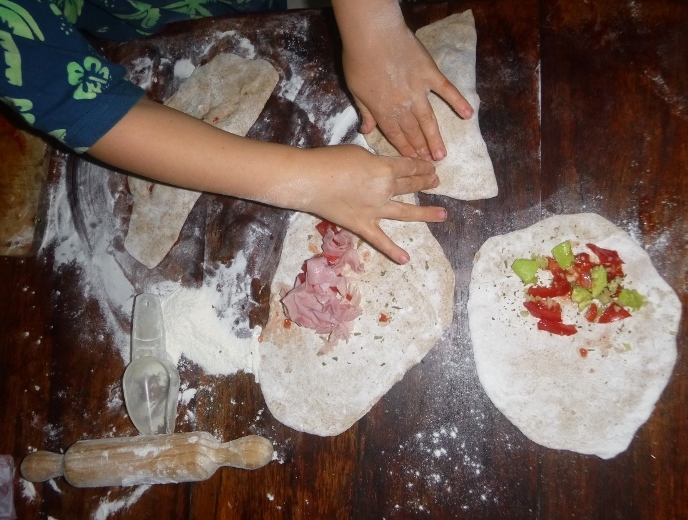 June 17, 2015
Finance and Investing Food and Cooking Principles of Frugality and Ethics Waste

We went shopping again last week! It was so exciting! We could buy food again! Only, I think I’ve forgotten how. We’re eating so well, I don’t really need to buy much…

…but we did buy some organic butter! My son and I can’t get enough of it. Slathered over bread, spread on crackers, melted onto potatoes. The evening we bought it (and peanut butter), we opened it before we even arrived home and dipped all our vegetables in it. The next night he wanted more, but I told him he had to put it on something so he dipped his walnuts deeply into the butter – about the same size knob of butter as each walnut. He was happy. Good fats for his brain.

Some of my food spend was medicine. I had a cold last week, so I was craving good organic ginger to add to my kombucha and make tea with. These are my latest two brews – ginger, and a hibiscus with fresh stevia. They’ll be ready tomorrow, but I’ve already sampled the ginger! 😉

I also wanted vitamin C, to enable us to glug down a few megadoses without stripping the neighbour’s orange tree. It helped kick the colds away. I bought a homeopathic remedy for my son. I bought dried valerian root because I have found a chill-out recipe for valerian hot chocolate – oh my goodness, yes. After I bought it, I decided to make a tincture with most of it, but I saved a little for the necessary hot chocolate recipe. I also ran out of turmeric, one of my main antioxidant and immune boosters, so I stocked up on that – do I class that as food or medicine?

I’m making a tincture of dandelion too, which is a clean unsprayed weed from my garden in a recycled glass jar topped up with alcohol that I bartered from a friend. And great medicine.

We’ve been eating better than usual, because I’ve been making all our food from scratch and avoiding all processed foods. My boy’s been doing lots of cooking with me as well. We even made our own sugar free ice cream, after a friend gave me a litre of beautiful creamy milk. I used milk, kefir, junket tablets I found in the pantry, and vanilla. That was the recipe on the junket packet (well, it said use milk and cream rather than milk and kefir, but this milk was half cream anyway). This is me in my pajamas in the middle of the night because I woke up and suddenly remembered that the ice cream needed stirring. It was a little crystallised but to an ice-cream-deprived boy it was delicious, even without the sugar.

We’re more in touch with the seasons, because we’re eating from the garden and other people’s excess produce. A friend gave me some avocados. I got grapefruit, choko and pepino at the monthly produce swap. There are oranges, lemons and limes on the neighbour’s trees. Think I might flavour my next kombucha with lemon.

I bought five kilos of local biodynamic spuds from a farmer friend for ten dollars. Potatoes plus butter = heaven!

We used Stephanie Alexander’s Kitchen Garden Cooking With Kids book to make potato and rosemary pizza. This was a great recipe for pizza without tomato paste, mozzarella, pineapple, olives, meat or any of the usual things I would put on pizza.

I sliced the potato with the scary slicer, and my son tossed them in rosemary and olive oil before arranging them on the pizza, after looking at the example in the book.

I think he did a great job! It was delicious. Like chips on top of pizza.

We used the last of the sheep’s cheese that I bought in April to top the pizza when it was cooked! I’ve been eking it out, and keeping it clean so it didn’t go mouldy before we ate it. It was still fine. It was expensive cheese, but it lasted well! Thanks, little cheese!

I used my usual bread dough for the base, instead of making two loaves of bread. I made one loaf of normal bread, half a loaf of pullapart bread, one pizza base and four calzone from the same batch of sourdough.

I made the dough while my child was at school so it had time to rest, putting some into the bread and pizza tins, and leaving some little balls for the calzone. He happily rolled out the little balls (using a little too much flour!),

filled the calzone and closed them.That gave him a snack before tea, one calzone for mum’s tea tonight, and two more calzone for his school lunches instead of sandwiches.

We bought ham from the deli in our own container, to avoid single use plastic. I’m not sure if the girl charged us for the weight of the container. Next time I’ll ask her to weigh it on a piece of paper, wrap it in paper and then put it into my container.

I’ve been picking green tomatoes from the garden and ripening them on the window sill. It’s a treat to still have homegrown tomatoes, almost at the winter solstice, and they won’t be around much longer!

This is our weekly grocery spend. Two weeks, actually; my challenge began on a Wednesday. I’ve also bought some food from the health food store (turmeric, valerian, two pawpaw sticks, sunflower seeds) and organic grocery store (ginger, dark chocolate and a kilo of carrots). So I’ve spent a little more than $15 in the last fortnight – $50 at the most. $25 a week. Pretty good, considering we eat superfoods with most meals and a lot of organic food.

Knowing how to make my own fermented foods helps, and all the tricks outlined in my last post. This week, my treats have been these amazing chocolate pumpkin seed clusters. They give me a chocolate boost, and a good amount of zinc which helps the immune system and skin health. I’ll write the recipe up soon. Look at that, it’s a map of Australia!

I also made myself a yummy pumpkin spice latte this morning, with bonus superfood twist, which I will come back to as well.

So we’re free to buy food again now, but I think we’ll mostly keep on doing what we’ve been doing. It tastes good, avoids waste, makes connections with neighbours and costs less. My next mission: cheap local apples.