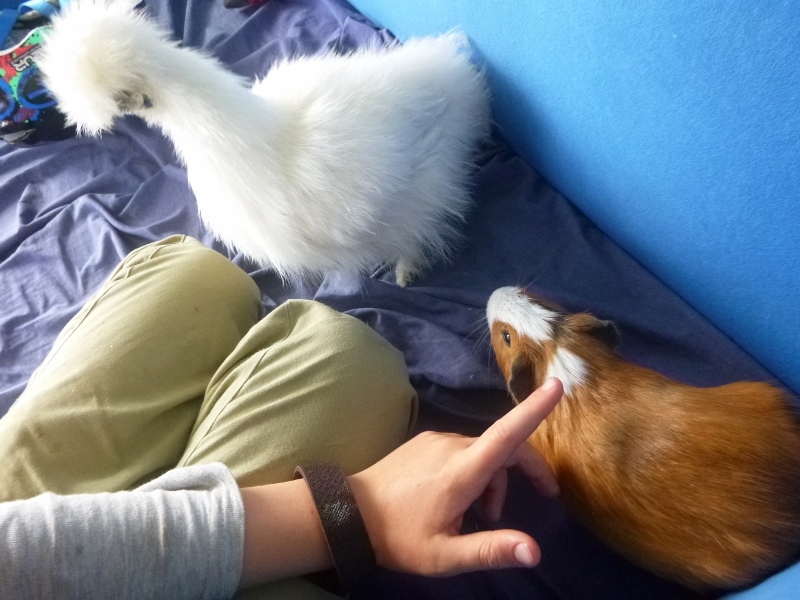 Five fluffy little silkie chicks and a couple of guinea pigs started off our backyard menagerie. I had 3 big Australorps waiting back at the farm, but no secure chookhouse to put them in. Meanwhile, the slaters and snails were decimating my vegie seedlings. Silkies are smaller than regular chooks however, and need less space. I started off housing them in one of our old guinea pig cages. It’s covered with old lino to reduce wind and rain, and weighed down with pallets to stop other people’s pets digging under their cage. They had a heavy shallow bowl for drinking water that is filled several times a day, and we soaked wheat for them as well as scraps.

Silkie chicks are small enough to free-range in the vegie garden beds for most of the day without too much damage. Most of my summer crops were half-grown (tomatoes, chamomile, carrots), and the last winter crops were going to seed (leek, lettuce, broad beans). In the window without little tiny plants, I enclosed small areas with chicken wire, catching each chick and plonking them in the garden pen to play. They got the hang of scratching for insects straight away. Once they’d frolicked enough, they rested in a leek forest.

After a week, we temporarily fenced off the driveway and let them roam the whole backyard. This won’t be their normal range, because I suspect the fencelines may be contaminated with DDT or similar. I tested the centre of the backyard and it came back clear for organophosphates, however there was a low level of lead in that part of the yard. Knowing the contamination levels in the soil helps to inform the design of my yard, for example: keeping chickens 2m away from the fenceline (the council guidelines say 1.5m, I’m adding leeway), growing root vegetables in the soil with the lowest lead levels or in raised beds with clean soil, where to increase or decrease pH levels (many heavy metals are more soluble in acidic soils, which may be useful if you are deliberately trying to release them in order to shift them out of the soil).

The chookhouse is slowly taking shape, made of upcycled pallets and scraps from the tip shop. The Australorps joined us after a friend gifted me an aviary. We had to add some wooden ramps inside, to help them fly up to the roost. There’s a nesting box down low as well as the high one, but they prefer to fly up and wriggle into the top one.

We moved the aviary and used it to hold up fencing around a chookyard. The posts are still wobbly because there’s rock a spade-depth under the surface. I’ll get them dug properly when I get the fruit tree holes excavated. The silkies are still in a separate house, so they don’t get pecked in the mornings before we let them out.

The big girls were thin and not laying when they arrived, although I bought them as young pullets less than a year ago. I tried out a chook tonic that I’d copied from a book somewhere, and all three started laying within the week. The same recipe worked a second time, several months later. We also had one our our silkie hens mauled by a dog, and managed to keep her alive with herbs, honey and isolation from the others.

Two of the silkies turned out to be roosters, so when they started crowing I gave them away. They were tame and friendly, and quickly found a good home. I had planned to eat them, but the kids were too attached to them.

I also accepted four Australorp roosters temporarily, packing their cage into the shed at night with boogie boards around them in an attempt to muffle their crows, until I had time to kill them for food. That was an interesting experience for the household. It wasn’t easy, but everybody ate them in the end. It was the first time I’ve butchered a creature by myself. It sparked some passionate discussion. My stance is that if we are going to eat meat, then we should take responsibility for the raising and killing of it rather than closing our eyes and blindly accepting whatever sanitised, disembodied version the supermarket offers.

We’ve made a household chore list, to make sure someone feeds the animals every day and shuts the chooks away every night, and avoid doubling up on feeding and egg collection. This helps to spread the responsibility, and make sure nothing is neglected.

The guinea pigs are a useful element in the system, as they are like biological lawnmowers. And much easier to fence than goats, sheep, geese or rabbits! They can reach up and nuzzle under, but they don’t dig, jump or fly. I have used them instead of whippersnippers. They don’t eat soil, so don’t have to be restricted to certain areas of the yard; and at this stage we aren’t eating them (my son was mightily offended when I mentioned the possibility). I’d like them to mow the whole lawn, but we did sadly lose a freerange guinea pig to a cat, so for the moment they are back in cages again. The children created a heartfelt funeral ceremony for him, held around the lemon tree that we’d planted on his grave. Everything is utilised in the garden. In the future, either we’ll have areas that are fully fenced or larger populations of guinea pigs that can suffer some losses.

One of my housemates has brought a rabbit, more guinea pigs, and a rescued joey. The half-grown kangaroo is a hit with all our Couchsurfers. They all take selfies with her, so she’s an international star now. She spends most of her time in her ‘pouch’ – a bag hanging on the veranda when she was smaller, and now a laundry basket. She has quite a taste for radishes, strawberry leaves and raspberry leaves (roo-pruned raspberry canes above), but they’ll grow back. She’s still drinking milk from a bottle too.

We had to upgrade our fencing to keep her in the yard, rather than hopping down the suburban street. We were generously gifted a gate from our local Buy Nothing group. It’s so Aussie seeing the kids playing backyard cubbies (or swinging off the Hills Hoist, until I catch them) with a little kangaroo grazing nearby. When she is mature, in about another year, she’ll be released to a safe farm.

We also have a worm farm, that was sitting empty and unloved at the farm, which receives the roo poo swept off the veranda, damp paper scraps and the copious coffee grounds of my coffee-loving housemates. It provides seething handfuls of worms that can be fed to the chickens as a treat or used to seed more worm farms, like the worm tube under the roses. The worm castings also make an excellent medium for seedlings when mixed with compost and sand.

Inside, we’re raising a dozen caterpillars, and feeding them on gum and citrus leaves. This is more for interest than waste reduction or fertiliser production. Although their poo is surprisingly copious! We have about 11 Emperor Gum Moths, one Orchard Swallowtail Butterfly and one unidentified citrus caterpillar.

I was concerned that turning a third of the backyard into chook and duck pens would decrease the space for the kids to play in, but of course they just build their cubbies inside the chookyard. They also spend hours cuddling the chooks, guinea pigs and rabbit. It’s good for the children’s immune systems and builds their empathy, and accustoms the animals to human contact. Cuddling a chicken in the hammock is very calming. Watching the chooks is also hilarious and entertaining.

Both the chooks and guinea pigs leave the ground clipped and fertilised, if they are moved on soon enough, or completely weeded and bare if they are left in one area too long. So population density and length of access determines whether they will mow or remove the grass. I might run tunnels to connect different areas of the yard, and to section parts off to enable greater control over how long the little animals access each area. In the future, we’re thinking about ducks, quail and bees. First we need to change the local bylaws that prohibit all beekeeping in residential areas.

You don’t need to spend a lot on housing or accessories. Most of our animal houses are from the tip shop, or gifted, or made from scraps. An old casserole dish makes a heavy water bowl that can’t easily be tipped over. We keep animal feed in old olive barrels and strong wooden boxes. A large yogurt tub is the right size to sprout several days’ worth of wheat, increasing the nutrient availability. I’m also planning to grow lots of forage crops and medicinal herbs like wormwood around the edge of the chookpen. They’re already relishing any choko leaf that dares to grow within pecking range. Weeds and excess garden greens are also thrown to the chooks.

Keeping small livestock in the backyard does take regular attention and some work to set up the infrastructure, but it multiplies the connections you can make between your house and yard. Benefits include mowing, eggs, manure, insect control, meat, compost turning, feathers, comfort, entertainment and fertiliser (dead animals). Keeping chooks, guinea pigs and worms means you can cycle all of your kitchen scraps into fertiliser and eggs. Guinea pigs eat the hard scraps, worms eat coffee and paper, chooks eat or scratch up everything else. Adding a compost pile will enable you to deal with all your garden waste as well. The compost helps the garden grow, and that helps feed the household, and the scraps go to the chooks, and that feeds the household and the garden, and the scraps go to the chooks, and their poop goes into the compost, and that helps the garden grow… how many dots can you join?

RetroSuburbia and the Household Landlord 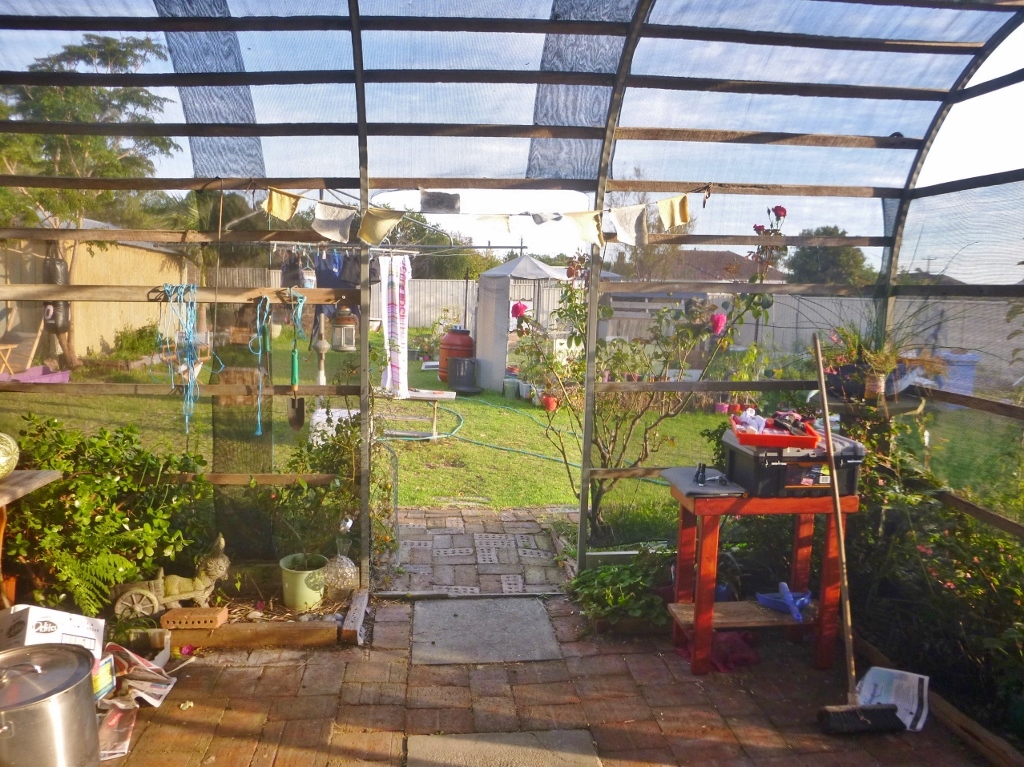 The Week It All Fell Apart